Many thanks to @daughterofnarcissus for this artwork. She drew it after reading our post at Light for Dark Times on unbiblical forbearance which is so often laid upon victims of abuse. As the first frame indicates, so many people here have been targeted by an abuser for decades. And yet, “the Bible says we are to forbear.”  Yeah. 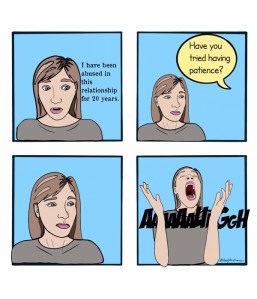 Link to article at LFDT – Abuse Counseling: How Long is “Forbearing”?

The Essential Nature of an Abuser – Devoid of Love

Read more about us

YOU DON’T NEED PERMISSION FROM YOUR PASTOR OR ANYONE ELSE TO DIVORCE YOUR ABUSER.

This article explains why not:
Will Your Church Leaders Stand With You Against Your Abuser? 3 Ways to Know

Pastor Crippen has recorded a 24-part in-depth Bible study on the book of 1 John. Many common questions about abusers are answered in 1 John (i.e. Is my abuser a Christian?)

A Message by PS Crippen