Listen to these far too common words from a pastor to an abused wife who has gone to him for help. The abuse has occurred for decades, habitually, without repentance:

There it is. “He has not committed the physical act of adultery. He has not physically abused you. Therefore, tough it out and quit complaining. Why, your husband is even willing to come down here to the church building with you and let me counsel the two of you.”

Remember, now, this has been going on for decades. And yet this pastor sees himself as some kind of counseling superman who can leap the tall buildings of this abuser’s lifelong wickedness in a single bound, and quicker than a speeding bullet he just knows that he will be able to show the victim how she is really pretty much to blame herself. Go, Super Pastor! 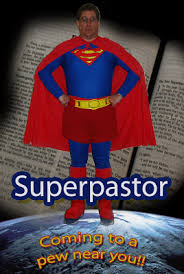 Doesn’t the Bible completely reverse these equations? Take 2 Corinthians 3 for instance. You know, where Paul teaches us how he is an apostle of a better covenant than the covenant Moses mediated. Why? Because the Old Covenant was an outward, physical covenant written on tablets of stone which resulted in a fading glory. In contrast, the New Covenant is of a greater, permanent glory because due to the atoning work of Jesus Christ the Spirit of God takes the Word of God and engraves it upon our hearts. Can’t see it, but in fact it is real and permanent. So this is simply to say to pastors and Christians who pull this “but he hasn’t ever physically….whatever” on us that God’s Word repeatedly emphasizes that just because something is not physical and external and visible in no way means that it is not real! In fact what is not seen (we walk by faith, not by sight) far surpasses in reality that which is fading away.

Their throat is an open grave; they use their tongues to deceive.” “The venom of asps is under their lips.” “Their mouth is full of curses and bitterness.”  (Rom. 3:13-14)

Deliver me, O LORD, from evil men; preserve me from violent men, who plan evil things in their heart and stir up wars continually. They make their tongue sharp as a serpent’s, and under their lips is the venom of asps. Selah Guard me, O LORD, from the hands of the wicked; preserve me from violent men, who have planned to trip up my feet. (Ps. 140:1-4)

Your tongue plots destruction, like a sharp razor, you worker of deceit. (Ps. 52:2)

Hide me from the secret plots of the wicked, from the throng of evildoers, who whet their tongues like swords, who aim bitter words like arrows, shooting from ambush at the blameless, shooting at him suddenly and without fear. They hold fast to their evil purpose; they talk of laying snares secretly, thinking, “Who can see them?” (Ps. 64:2-5)

And the tongue is a fire, a world of unrighteousness. The tongue is set among our members, staining the whole body, setting on fire the entire course of life, and set on fire by hell. For every kind of beast and bird, of reptile and sea creature, can be tamed and has been tamed by mankind, but no human being can tame the tongue. It is a restless evil, full of deadly poison. (James 3:6-8)

Alright then, we shall now ask Mr. Super Pastor/Christian/counselor:–

You say that this abuse is not real, or at the most it is really not so serious and dangerous as the victim seems to think, because it is not physical. It’s, well, it’s just words or looks, or non-contact behaviors that…well, you know…can’t really hurt anyone so seriously that they would justify that greatest of evils, divorce!? And yet, here is a curious thing. God says…hear that?  GOD says that the abuser’s words are:

So let’s just see what we have here. This woman who has come to you for help is being bitten by an asp, is having violence effected against her, is being cut with a sharp razor and run through with a sword, she is being shot with arrows, burned with fire, and fed a deadly poison regularly.

And you say that this is not grounds for divorce because it is not “physical.” What you mean is, “what is being done to you, Mrs. Victim, isn’t real.”

Mr. Super Pastor, God disagrees with you. You are at odds with the Lord Jesus Christ! He has spoken on this over and over in His Word. He says that non-physical, verbal, emotional abuse is real. That it is deadly. It is murder. That’s what God says.

So please, take some advice. Listen carefully. Stop saying “but it isn’t physical abuse.” Stop it. You are only hurting the victim, showing yourself to be ignorant of the nature and tactics of abuse, and worst of all you are opposing the King whom you claim is your Lord.

One final note for the notorious “permanence view” crowd. Look closely at the list above. You teach that God does not permit the victim of such evil to divorce her poisoner, cutter, stabber, and burner. What shall we say to you? Nothing. Because if you can’t figure out that God permits divorce for the evils in this list, I know of nothing I can say to straighten you out.

Betrayal by Friends and Family is Nothing New

As it Was in Jeremiah’s Day – CRC Sunday Sermon