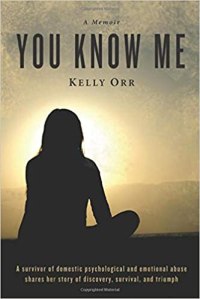 You Know Me: A survivor of domestic psychological and emotional abuse shares her story of discovery, survival, and triumph

Kelly’s new book just published yesterday and is available HERE* on Amazon. This is still another new tool, and an excellent one, to help abuse victims know they are not alone, that they are not crazy, and precisely what is really happening to them.

It is also a book that exposes the far too typical scenario of pastors and churches and fellow Christians adding to the abuse and enabling the abuser.

For those of you who are faced with the reality or possibility of losing custody of your children to an abuser, Kelly’s book will also serve as a faith booster as Kelly tells us about the severe trial she went through.

As we see more tools like this being published, it is our prayer that the power of evildoers will be increasingly broken by the Light of Christ’s truth shining upon them.

Thank you Kelly for giving us your story.

6 thoughts on “A New Book by our Friend Kelly Orr”

An Appearance of Godliness (Pt 20) – The Judas Moment